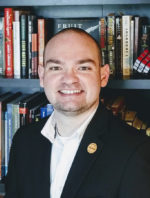 Specialties: I have a particular passion for working with LGBTQIA+ clients to address concerns related to stress management, trauma, anxiety and depression, career counseling, sex counseling, and consensual nonmonogamy.

Counseling Philosophy:
We all have needs. Sometimes they’re big, complicated needs like a feeling of belonging or sense of purpose. Sometimes needs are more basic like getting enough sleep or feeling safe where we live. Whenever we don’t get a need met, that creates unfinished business – needs that linger around. Too much unfinished business and we become fragmented, unable to effectively deal with our present because we’re so consumed about past needs or too worried about future ones. Using a foundation based on a combination of Gestalt Therapy, Feminist Therapy, and Solution Focused Brief Therapy, I help people define and address their needs.

Training & Background:
I am a Licensed Professional Counselor serving clients remotely throughout Illinois. With nearly a decade of experience working with a diverse range of students and clients ages 14 and up, I have served as a college educator, academic advisor and career coach since 2011 and a mental health practitioner since 2018. I earned my MA in Counseling & Guidance from the University of Missouri-Kansas City and my MA in Education from the University of St. Mary.

About Me:
I’m a huge nerd! Outside of my counseling work, I spend a lot of my free time gaming with friends and family, reading or watching sci-fi, and getting lost down Wikipedia rabbit-trails. I’ve also become a big fan of history YouTube. Self-care is important, so I also take regular walks and aspire to flexibility by practicing yoga.

John is relatable rather than aspirational. During his life John has experienced negative thoughts, gay conversion therapy, coeliac disease, back surgery and identifies as autistic. He has also become the only British winner of the International Mr Leather contest in Chicago and had a ten year career as a stand-up comedian which has taken him around the world.

He wants to help other people, especially those who feel like an outsider. You may feel that way because of your gender or sexuality, neurodiversity, health diagnosis or just a feeling of “not fitting in”. John will listen and ask questions in total confidence and without judgement.

John has helped his clients to discover who they are, what their passions are, find their voice, achieve goals, accept themselves, be happier and change their lives.

If you would like to discuss a complimentary session with John please get in touch by email or using the contact form on his website: https://www.johnpendal.com/

His full leather history is at http://www.leatherlondonguide.com/profile.html